To develop the evidence-base to support this priority, we first review information on cat presence/absence on Australian islands and mainland cat-proof exclosures, finding that cats occur across >99.8% of Australia’s land area. Next, we collate 91 site-based feral cat density estimates in Australia and examine the influence of environmental and geographic influences on density.

Feral cat densities are higher on small islands than the mainland, but similar inside and outside conservation land. Mainland cats reach highest densities in arid/semi-arid areas after wet periods. Regional variation in cat densities corresponds closely with attrition rates for native mammal fauna.

The overall population estimate for Australia’s feral cats (in natural and highly modified environments), fluctuating between 2.1 and 6.3 million, is lower than previous estimates, and Australian feral cat densities are lower than reported for North America and Europe. Nevertheless, cats inflict severe impacts on Australian fauna, reflecting the sensitivity of Australia’s native species to cats and reinforcing that policy, research and management to reduce their impacts is critical.

Feral cats are among the most damaging invasive species worldwide, and are implicated in many extinctions, especially in Australia, New Zealand and other islands. Understanding and reducing their impacts is a global conservation priority.

We review knowledge about the impacts and management of feral cats in Australia, and identify priorities for research and management.

In Australia, the most well understood and significant impact of feral cats is predation on threatened mammals. Other impacts include predation on other vertebrates, resource competition, and disease transmission, but knowledge of these impacts remains limited.

Lethal control is the most common form of management, particularly via specifically designed poison baits. Non-lethal techniques include the management of fire, grazing, food, and trophic cascades. Managing interactions between these processes is key to success.

Given limitations on the efficacy of feral cat management, conservation of threatened mammals has required the establishment of insurance populations on predator-free islands and in fenced mainland enclosures.

Research and management priorities are to: prevent feral cats from driving threatened species to extinction; assess the efficacy of new management tools; trial options for control via ecosystem management; and increase the potential for native fauna to coexist with feral cats.

To protect native prey, lethal control is often used with the aim of reducing or exterminating invasive predator populations. The efficacy of this practice however is often not considered despite multiple practical and ecological factors that can limit success.

Here, we summarise contemporary knowledge regarding the use and challenges of lethal control and alternative approaches for reducing invasive predator impacts.

As the prevailing management approach, we outline four key issues that can compromise the effectiveness of lethal control: release of herbivore and mesopredator populations; disruption of predator social systems; compensatory predator immigration; and ethical concerns.

Considerable uncertainty remains regarding the effectiveness of management approaches in different environmental contexts.

We propose that the deficiencies and uncertainties outlined here can be addressed through a combination of adaptive management, expert elicitation, and cost-benefit analyses.

Feral cats have been present in Australia since soon after European settlement. They are now numerous and pervasive across the continent, and occur on many islands. Although they have been recognised as a Key Threatening Process to Australian biodiversity under the EPBC Act since 1999, and there has been a Threat Abatement Plan for them in place since 2008, there has to date been little progress towards their effective management.

The challenges to effective control of feral cats in Australia are formidable. The geographic scale of concern is immense; many potential control mechanisms (such as trapping and shooting) typically have only superficial, transient and localised benefits; design of effective baits has only recently progressed substantially; there may be significant non-target impacts (including for threatened species such as quolls) from such toxic baits; baiting programs may need to be sustained for many years, and in many places need to also consider integration with control of foxes; reduction in cat numbers may have unwanted consequences (increases in other pest species, such as rabbits or introduced rodents); control programs will be expensive; and there will be some community concern about cat control.

However, progress towards the effective control of feral cats will achieve marked biodiversity benefits. Such control is likely to be substantially more efficient and cost-effective, and produce more enduring outcomes, than alternative conservation approaches based on intensive management for individual threatened species.
Here, we propose short-term (one year) targets towards the effective control of feral cats in Australia. These targets are set within a broader contextual and long-term (ca. 20 years) objective: No further extinctions of Australian wildlife, and pronounced recovery (and return to the wild) of at least 40 currently threatened animal species.

The targets recommended here are designed strategically to help establish a robust foundation for the decadal-scale campaign likely to be required to achieve enduring success. This should not be taken to indicate that significant progress can be achieved, if at all, only at glacial speed. Rather, explicit and dramatic short-term targets set now are required to overcome inertia, to recognise that this is a problem that should be confronted, to demonstrate that successful outcomes are possible, and because the continuing existence of some threatened species requires immediate action.

The war between cat-lovers and bird-lovers may have found its compromise: larger predators. Dingoes may do a far better job than humans of keeping feral cats in check, and without the ethical baggage. In other words, if you want to kill a feral cat, get a wild dog.

That’s the message from Arian Wallech et al. in a recently published piece: Novel trophic cascades: apex predators enable coexistence. Wallach’s paper reinforces my research into the interactions between dingoes and feral cats in Australia. Using native predators to kill or scare off introduced predators could be our best bet; working with nature , not against it.

But can we apply our learnings to other contexts and ecosystems? Stan Gehrt of Ohio State University thinks so: he studies the much-maligned coyote — specifically a thriving urban population in Chicago — which seems to be keeping the local cats at bay.

Read the full article and reader comments at wired.com

The Victorian Government is considering reintroducing Tasmanian Devils to Wilsons Promontory National Park, in part to help control fox and feral cat numbers. I spoke to the ABC’s Jonathan Kendall about the evidence.

Feral cats are devastating our wildlife, so we need a long-term, sustainable solution. This is where Australia’s natural predators come in. 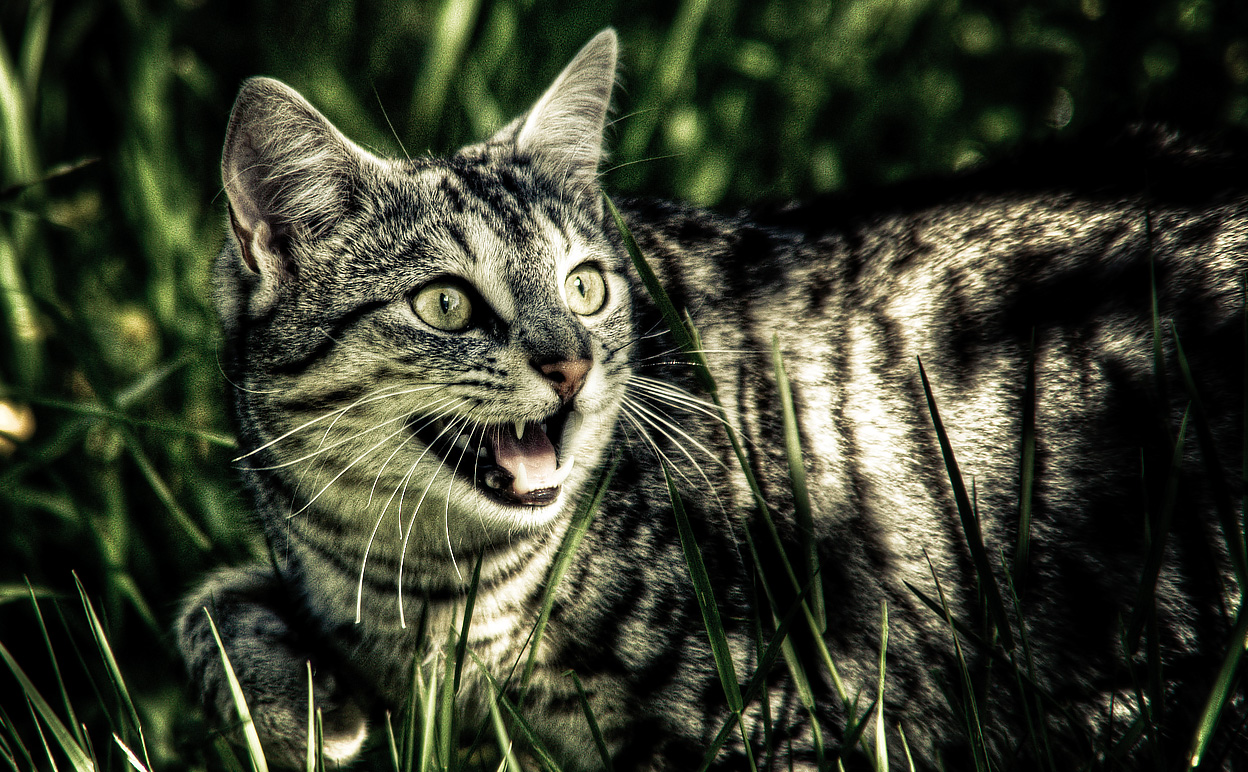 Feral cats are decimating Australian wildlife. Could the introduction of apex predators be part of the solution? Image credit Timo via Flickr.

A few moments on the internet will reveal that, as companion animals, cats are rivalled only by dogs. Our love affair with them is hardly surprising: they are elegant, graceful and affectionate animals. But they are also highly adaptable and successful hunters. Sadly our soft spot for them brings with it disastrous consequences for smaller wildlife species, particularly mammals, birds and reptiles.

Cats are wreaking havoc on our native wildlife, from northern Australia’s Kimberley to southern Australia’s Alps: nowhere is unaffected. Along with other threats such as habitat loss and fire, cats are pushing many native animals to the brink of extinction.

How serious is the cat problem? It’s been estimated that there may be as many as 15 million feral cats in Australia, each killing about five native animals per night: a nightly total of around 75 million native animals. And it’s not just feral cats doing the damage; that adorable Fluffy has a sinister side too. It often isn’t recognised that there is abundant and diverse native wildlife in and around many Australian cities and towns, including bandicoots, sugar gliders, quolls, koalas, parrots, water dragons and snakes. The development of remotely triggered camera traps has provided ample evidence that such wildlife frequently falls victim to domestic cats on their nightly excursions.

For a long time our other invasive predator of note, the European red fox, was seen as enemy number one to our wildlife, particularly mammals, but there’s a growing realisation that its many meals are eclipsed by those of cats, both feral and owned. Globally, cats are rated at 38th and red foxes at 99th on the IUCN’s list of 100 of the World’s Worst Invasive Alien Species.

And it’s not just cats’ appetites that are doing the damage. Cats are the primary host of the parasite Toxoplasma gondii, which can infect most mammals and birds, causing the potentially fatal disease toxoplasmosis (toxo). Even when not lethal, toxo can impact wildlife populations indirectly, through effects that include impaired vision, disorientation, loss of coordination, anorexia, lethargy, fever, skewed offspring sex ratios and abortion. Most bizarrely, animals infected with toxo are often attracted to the smell of cats and hence are more likely to be killed and eaten by them; a kind of parasite-driven mind control.

So what can we do to reduce the damage done by cats and mitigate this national conservation disaster? The most urgent needs are for vigorous education and awareness campaigns about the impacts of cats on wildlife, and tighter regulations and enforcement around responsible cat ownership. This should include mandatory desexing, the imposition of night-time curfews and containment of cats within pet owners’ properties at all times.

In addition, a number of on-ground solutions are already available or under consideration; there is no doubt that a range of measures will be essential. These include the development of cat-specific poison baits and release of a cat-specific virus. However cat control through disease and poison programs are unlikely to be effective long-term, as natural selection will favour disease-resistant and cautious cats which will result in rapid population bounce-back. After all, cats are known for their smarts, being more attracted to moving prey and suspicious of foreign objects. Under good conditions, furthermore, they can reproducequickly and bountifully.

Fencing can effectively exclude cats from habitats and provide wildlife refuges, and they play a critical role in holding the line for species such as bilbies, already teetering on the edge of extinction. However the use of fencing as a regular and ongoing strategy for wildlife conservation in our vast country will not only be logistically challenging (perhaps impossible) but also forbiddingly expensive. More fences will also result in it becoming harder and harder to see bilbies, bandicoots and many other native species in the wild. What a sad outcome for our nation and what an indictment of our allowing cats to reign supreme and unchecked!

Why are cats able to run rampant? A significant reason is the lack of balance that now characterises our ecosystems. A crucial step is likely to be returning native top predators, in particular dingoes and Tasmanian devils, to landscapes, so that they can resume their important ecological roles. Scientific research (pdf) is strongly suggesting that dingoes not only kill cats but also instill fear in them, which means that they avoid areas and times where dingoes are active. Hence dingoes can provide a 24-hour-a-day, seven-day-a-week, cat control service.

If we want to conserve our iconic and globally unique wildlife then we need to work with, rather than against nature, and supporting more positive management of dingoes and returning Tasmanian devils to mainland Australia for their biodiversity benefits (pdf)would be one of the best and most cost effective things policy-makers could do now. Non-government conservation organisations such as the Australian Wildlife Conservancy are already leading the way.

In 1995 the USA and Canada worked together to reintroduce wolves to Yellowstone for their ecosystem benefits. The success of this bold step is now the stuff of legend. Isn’t it time we had our ‘Yellowstone moment’ and began restoring Australia’s ecosystems to some of their former glory?