Much of my time as an ecology lecturer has been spent teaching students about the wonders of this planet’s biodiversity, but also regrettably, how much of this biodiversity is under severe threat. Hundreds, if not thousands, of species become extinct each year.

With such a disastrous outlook for the species with which we share Earth, it’s easy to get disheartened about where we’re headed. More personally, I often question whether my own fields of science (ecology and conservation biology) are really enough to help stem the extinction tide.

But this week I’m embarking on a journey to Papua New Guinea’s remote Torricelli Mountains. It’s part of a crowd-funded project, Discovering Papua New Guinea’s Mountain Mammals that is a partnership between myself at Deakin University and Jim and Jean Thomas of the Tenkile Conservation Alliance. Together we will count and identify mammals as part of conservation efforts in the region, including some very special species of tree kangaroo. 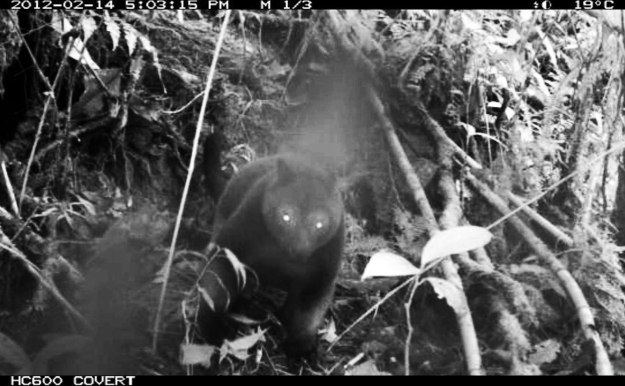 Just how many Tenkile tree kangaroos are left and where are they found? Our cameras will provide these answers Image credit: Tenkile Conservation Alliance

Who or what is a Tenkile?

The Tenkile (pronounced ten-kee-lay) is one of 14 tree kangaroo species found in the tropical rainforests of New Guinea and Australia.

In 2001 there were only 100 Tenkile left in the Torricelli Mountains of PNG. To put that in perspective, there are thought to be around 1600 Giant Pandas in the world today. That made the Tenkile one of the world’s most endangered animals. The reason they’re still with us today is largely thanks to the work of the Tenkile Conservation Alliance.

The conservation alliance sets itself apart from many others by focusing on causes rather than symptoms of extinction. The Tenkile had become endangered due to over-hunting, so rather than ignore the needs of local people, the alliance places a strong emphasis on these communities who share the region with the Tenkile.

The reason for the bounce back of Tenkiles is a switch from hunting to more sustainable and reliable sources of protein, including farmed rabbits and chickens. Along with improved education about the local community’s wildlife, and health and living conditions, there has been a real reversal in the once dire trajectory of the region’s wildlife. Thanks to these actions there are now more than double the number of Tenkile there were in 2001.

Professor Tim Flannery, himself no stranger to the wilds of PNG, wrote:

A decade on, the Tenkile Conservation Alliance is the most successful conservation organisation in Melanesia … and no other organisation I know of in a developing country has had anything like this degree of success.

What do we hope to achieve in PNG this time?

Our upcoming trip will take us to the northwestern Torricelli Mountains near the Waliapilik area in Sanduan Province. Over two weeks we’ll place 35 remote, motion-sensing cameras out along lines and an elevation gradient ranging from 500 to 1500 m above sea level. These will help us determine a number of things, including:

To say this trip is full of anticipation is putting it lightly. Along with the critical information we aim to collect on tree kangaroos, we also suspect new species are to be found in the area, including miniature wallabies and echidnas.

When we retrieve our cameras in a few months time it’s going to be exciting to see what we find, and it’s almost guaranteed that there will be many firsts for science. Because camera traps detect and record anything that moves past them, we’ll collect valuable data on a large range of species.

Thanks to all who have helped get us this far. This is just the beginning, and if you’d like to contribute or stay in touch please contact me here.