This article was originally published on The Conversation. Read the original article, including reader comments. 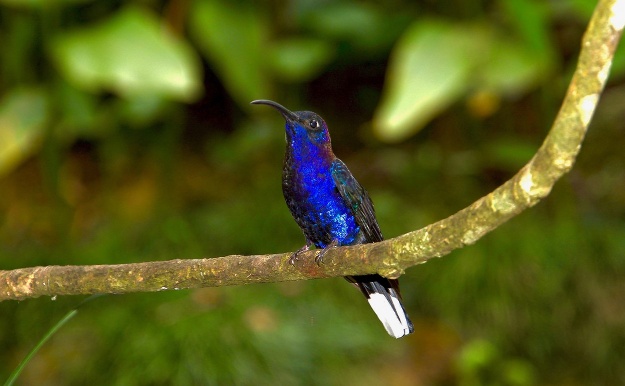 To conserve Earth’s remarkable species, such as the violet sabrewing, we must also defend the importance of science. Image credit: Jeremy Kerr via The Conversation.

Science is the best method we have for determining what is likely to be true. The knowledge gained from this process benefits society in a multitude of ways, including promoting evidence-based decision-making and management. Nowhere is this more important than conservation, as the intensifying impacts of the Anthropocene increasingly threaten the survival of species.

But truth can be inconvenient: conservation goals sometimes seem at odds with social or economic interests. As a result, scientific evidence may be ignored or suppressed for political reasons. This has led to growing global trends of attacking scientific integrity.

Recent assaults on science and scientists under Donald Trump’s US administration are particularly extreme, but extend far more broadly. Rather than causing scientists to shrink from public discussions, these abuses have spurred them and their professional societies to defend scientific integrity.

Among these efforts was the recent March for Science. The largest pro-science demonstration in history, this event took place in more than 600 locations around the world.

We propose, in a new paper in Conservation Biology, that scientists share their experiences of defending scientific integrity across borders to achieve more lasting success. We summarise eight reforms to protect scientific integrity, drawn from lessons learned in Australia, Canada and the US.

What is scientific integrity?

Scientific integrity is the ability to perform, use and disseminate scientific findings without censorship or political interference. It requires that government scientists can communicate their research to the public and media. Such outbound scientific communication is threatened by policies limiting scientists’ ability to publish, publicise or even mention their research findings.

Public access to websites or other sources of government scientific data have also been curtailed. Limiting access to taxpayer-funded information in this way undermines citizens’ ability to participate in decisions that affect them, or even to know why decisions are being made.

A recent case of scientific information being suppressed concerns the rediscovery, early in 2017, of the plant Hibbertia fumana in New South Wales. Last seen in 1823, 370 plants were found.

Rather than publicly celebrate the news, the NSW Office of Environment and Heritage was reportedly asked to suppress the news until after a rail freight plan that overlapped with the plants’ location had been approved.

Protecting scientists’ right to speak out

Scientists employed by government agencies often cannot discuss research that might relate to their employer’s policies. While it may not be appropriate for scientists to weigh in on policy recommendations – and, of course, constant media commentaries would be chaos – the balance has tipped too far towards restriction. Many scientists cannot publicly refer to their research, or that of others, let alone explain the significance of the findings.

To counter this, we need policies that support scientific integrity, an environment of transparency and the public’s right to access scientific information. Scientists’ right to speak freely should be included in collective bargaining agreements.

Scientific integrity requires transparency and accountability. Information from non-government scientists, through submitted comments or reviews of draft policies, can inform the policy process.

Although science is only one source of influence on policy, democratic processes are undermined when policymakers limit scrutiny of decision-making processes and the role that evidence plays in them.

Independent reviews of new policy are a vital part of making evidence-based decisions. There is room to broaden these reviews, inviting external organisations to give expert advice on proposed or existing policies. This also means transparently acknowledging any perceived or actual vested interests.

Australian governments often invite scientists and others to contribute their thoughts on proposed policy. The Finkel Review, for example, received 390 written submissions. Of course, agencies might not have time to respond individually to each submission. But if a policy is eventually made that seems to contradict the best available science, that agency should be required to account for that decision.

Finally, agencies should be proactively engaging with scientific groups at all stages of the process.

Strengthening scientific integrity policies when many administrations are publicly hostile to science is challenging. Scientists are stuck reactively defending protective policies. Instead, they should be actively advocating for their expansion.

The goal is to institutionalise a culture of scientific integrity in the development and implementation of conservation policies.

A transnational movement to defend science will improve the odds that good practices will be retained and strengthened under more science-friendly administrations.

Many regard science as apolitical. Even the suggestion of publicly advocating for integrity or evidence-based policy and management makes some scientists deeply uncomfortable. It is telling that providing factual information for policy decisions and public information can be labelled as partisan. Nevertheless, recent research suggests that public participation by scientists, if properly framed, does not harm their credibility.

Scientists can operate objectively in conducting research, interpreting discoveries and publicly explaining the significance of the results. Recommendations for how to walk such a tricky, but vital, line are readily available.

Scientists and scientific societies must not shrink from their role, which is more important than ever. They have a responsibility to engage broadly with the public to affirm that science is indispensable for evidence-based policies and regulations. These critical roles for scientists help ensure that policy processes unfold in plain sight, and consequently help sustain functioning, democratic societies.

The authors would like to acknowledge the contribution of Dr Carlos Carroll, a conservation biologist at the Klamath Center for Conservation Research.