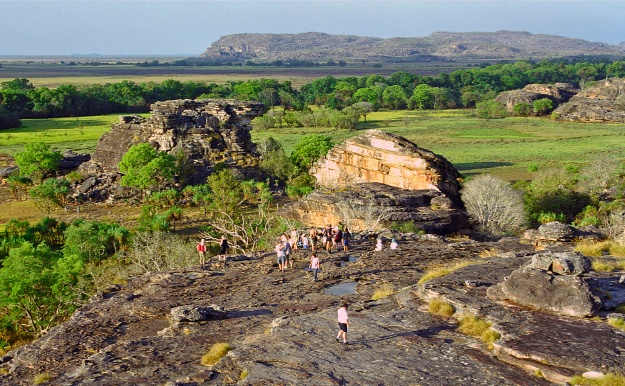 Kakadu National Park is Australia’s largest – but we need to make sure parks are actually protecting wildlife from threats. Image credit: Rita Willaert via Flickr

While we can never know for sure, an extraordinary number of animals and plants are threatened with extinction — up to a third of all mammals and over a tenth of all birds. And the problem is getting worse.

At the same time, we have more land and sea than ever in protected areas (“parks”) — more than 200,000 protected areas covering about 15% of the world’s land area and 3% of the oceans.

So why are protected areas making so little difference?

This is a vital question about the future of nature that should be discussed at Sydney’s World Parks Congress, beginning today.

This once-in-a-decade Congress, led by the World Conservation Union (IUCN), will be attended by thousands. A sobering reality will lie behind the excitement and networking: while protected-area systems expand, we are losing the planet’s species at an alarming rate.

One reason is that protected areas are only one of our tools, and will never do the job alone. IUCN could say, though, that it’s doing the best it can.

But another reason, more confronting for IUCN, is that protected areas tend to be in the wrong places.

Just about anywhere people have looked, the majority of protected areas are residual — leftover areas of the world pushed to the margins where they least interfere with extractive activities such as agriculture, mining, or forestry.

On land, protected areas are mainly remote or high, cold, arid, steep, and infertile. Similar patterns are emerging in the sea.

Meanwhile, biodiversity continues to be lost in landscapes and seascapes suitable for clearing, logging, grazing, fishing, and extraction of minerals, oil, and gas.

Residual protection also gives the false appearance of progress because many people equate the number of protected areas and their extent with success.

These figures are only “good news” if they tell us about the difference these parks make to conservation. They don’t.

Failing to stop the losses

The most rigorous estimates of the difference that protected areas make are small.

By 2008, only 7% of Costa Rica’s much-lauded protected-area system would have been deforested in the absence of protection.

Globally, in 2005, the loss of native vegetation prevented by protected areas was 3% of their extent.

Aiming for the wrong targets

Protected areas that make little or no difference should be a major concern for IUCN, especially because targets for protection endorsed by the Convention on Biological Diversity at best obscure and at worst encourage the failure of protected areas to make a difference.

The Convention’s targets are meant to guide decisions on protected areas to 2020. The only unambiguously quantitative target (number 11) says nothing about making a difference. It aspires to 17% of land and 10% of the sea under formal protection.

The result has been a rush to proclaim large, remote protected areas where they are easiest to establish and make least difference. The story is familiar in conservation and beyond: provide a simplistic metric that implies success, and it will be manipulated to achieve high scores.

Another of the Convention’s targets (number 5) gets closer to the real purpose of protected areas, but remains problematic: “By 2020, the rate of loss of all natural habitats, is at least halved and where feasible brought close to zero, and degradation and fragmentation [are] significantly reduced.”

But there are problems here too. Before we halve the rate of loss, we need to know what the “baseline” rate of loss is — and over what period it should it be measured. Should it be measured in the past, when loss might have been slower, or now? Habitat loss also varies across the world — does that mean that reduction in loss rates of some areas can offset faster losses elsewhere?

Several kinds of tropical forests, for example, housing most of the world’s terrestrial species, are being lost rapidly. For these, even a halving of the rate of loss will mean mass extinction.

Australia, as host of the World Parks Congress, will show off its conservation wares. The display window is less impressive than when Australia genuinely led global conservation thinking from the 1970s to 1990s.

Our protected areas on land, such as those in the host state, are strongly residual (claims of an improving trend are based on inadequate data).

Australia’s marine parks, which are directed more at satisfying total protected area than protecting threatened marine biodiversity, show other countries how not to protect the sea.

And the only quantitative targets in Australia’s Strategy for the National Reserve System — for protected extent and coverage of regional ecosystems — leave plenty of scope for more parks that make little or no difference.

Not content with marginalising protection, Australian governments are weakening what’s there. Parks on land are being opened up for livestock grazing, industrial logging, mining, “conservation hunting”, and commercial development.

No-take zones in marine parks are being opened up for fishing. The Great Barrier Reef Marine Park is in jeopardy and the plan to fix it is destined to fail.

Here are four ways for IUCN to lead the way to parks that make a bigger difference:

Ultimately, the success of conservation depends on what natural resources are left unexploited by humans so that other species can survive.

Protection that does not avoid the loss of species and ecosystems merely gives the appearance of conservation progress under exploitative business-as-usual.

Real conservation – the kind that makes a difference – depends on IUCN’s leadership. Every year of delay means irreversible, avoidable loss of biodiversity.

This article was co-authored by Dr Piero Visconti, Board Member of the European Section of the Society for Conservation Biology in Washington, D.C.

This article was originally published on The Conversation. Read the original article online, including reader comments.